Guys, I have the perfect vegan dessert for you today!! Pecan Brownie Vegan Pie! 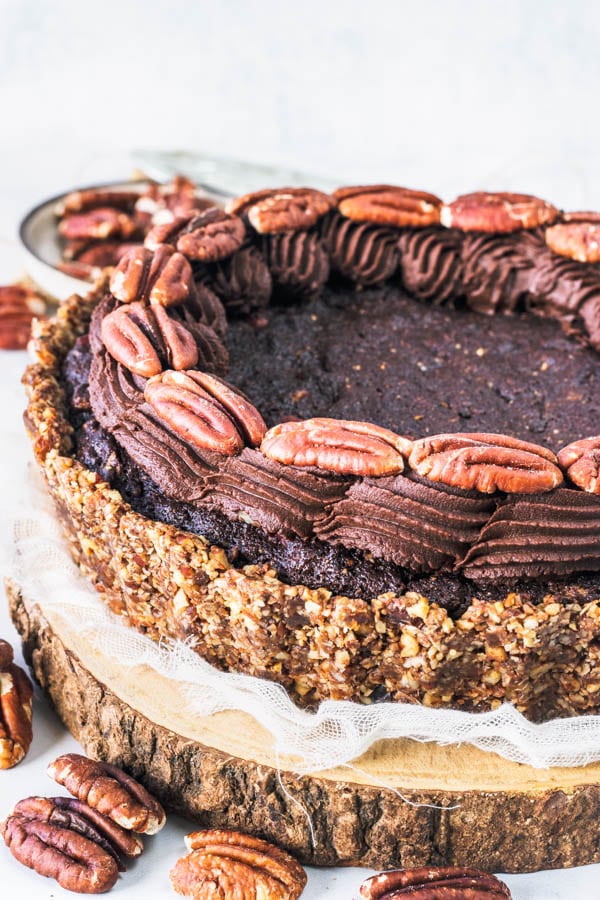 This Pecan Brownie Vegan Pie is also paleo, refined sugar free, gluten-free, dairy-free, which all my other vegan desserts also are.

And I am not saying I will become vegan anytime soon, or even ditch butter and white sugar from my pantry. I won’t, at least not for the time being. I don’t believe it’s that awful to have a slice of cake, or a macaron every now and then. Nowadays, we have more access to information we didn’t before regarding the consequences of eating refined sugar, white flour, industrial vegetable oils, and stuff like that. So I am willing to explore options of “healthier” baking if you even want to call it that.

I don’t want to get into the argument of what defines “healthy”. Anyway I am trying to learn how to make desserts with more natural, less processed ingredients. And that’s it for now. 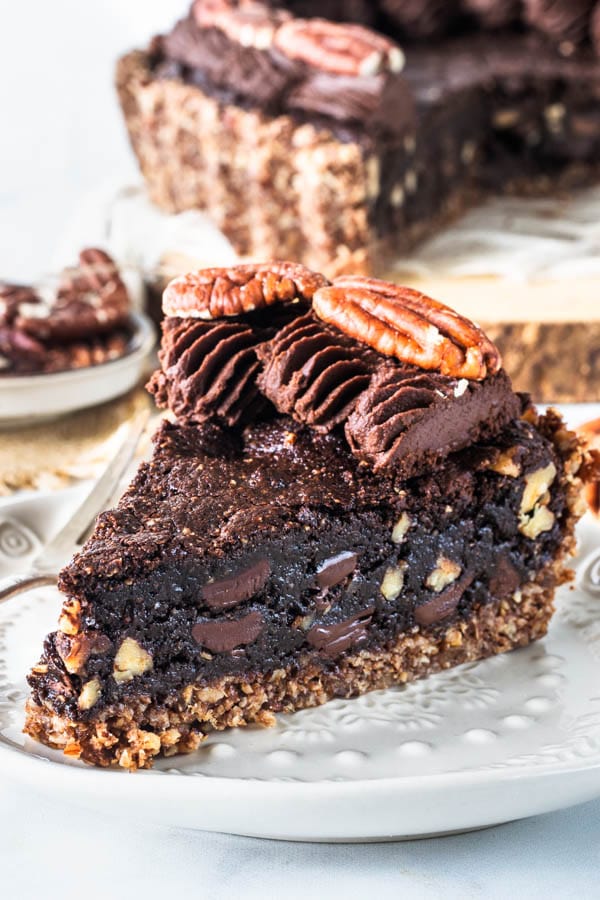 So let’s now talk about how to make this delectable Pecan Brownie Vegan Pie.

We are going to start with a very simple Pecan Crust. Done in 5 minutes. Just throw all ingredients in the food processor and let it do its job. The mixture will be very clumpy and “wet”. 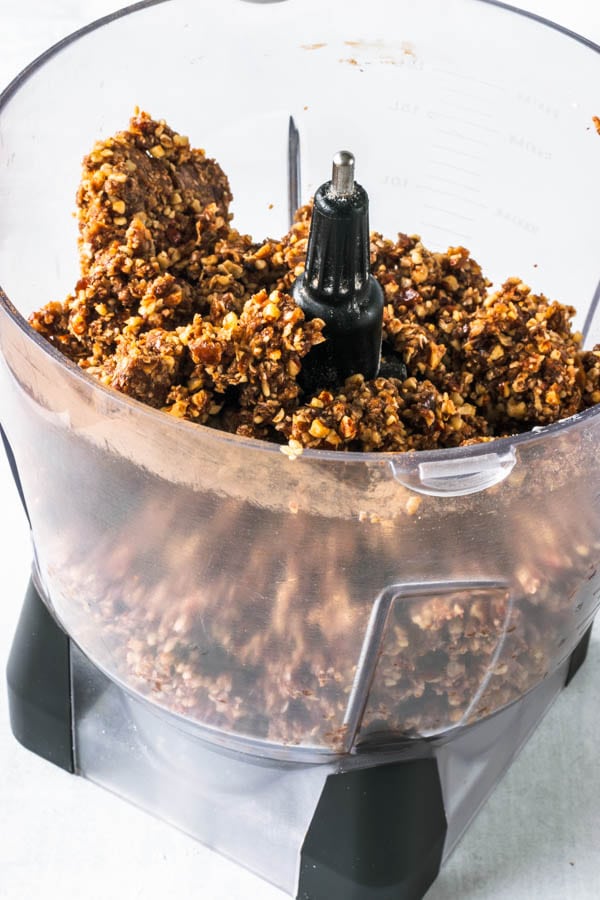 Press that mixture onto the bottom of your favorite tart pan. This is mine, I got it for like 50 cents in Brazil. I like it cause it’s so deep! So it allows my tarts to have a thick layer of filling, which makes for a beautiful slice like you saw above! 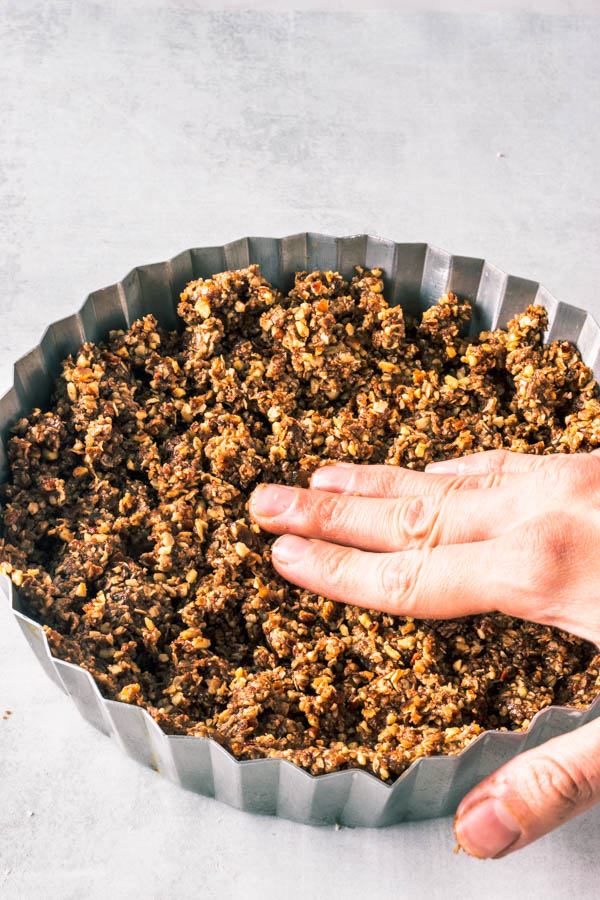 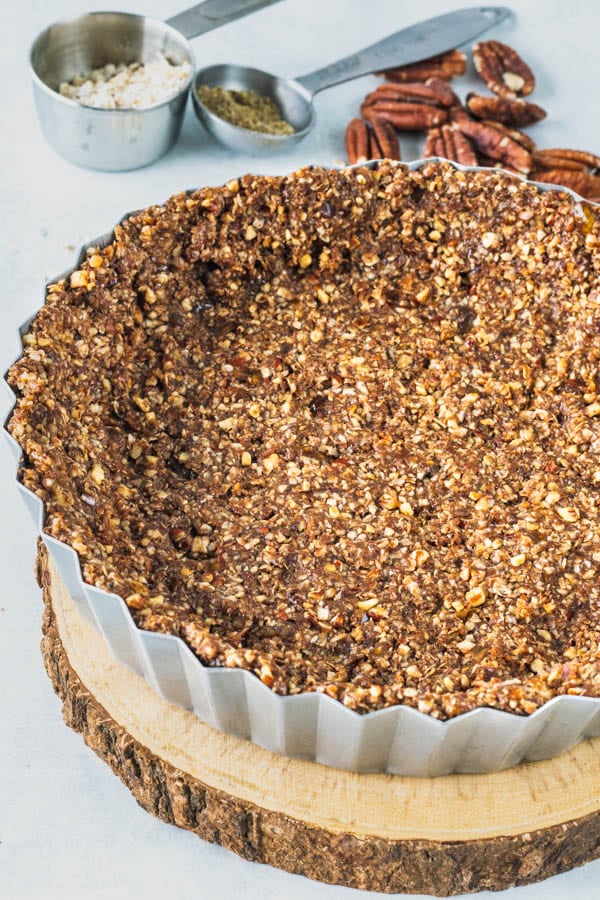 That crust is delicious, it was hard not to keep snacking on it while I was trying to line the bottom of the tart pan with it.

Place crust in the freezer to firm up while you make the brownie filling.

Now we pour our brownie batter over crust of our vegan pie. 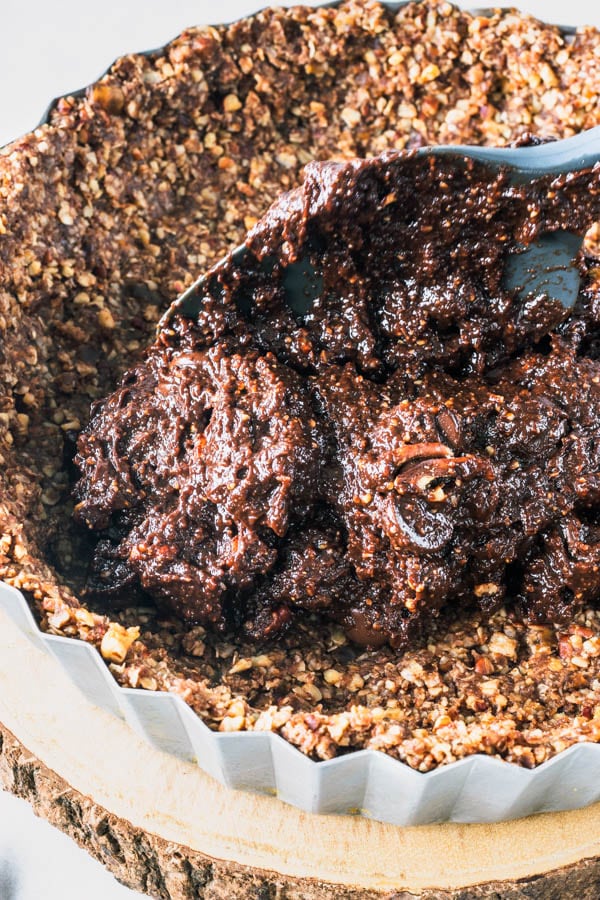 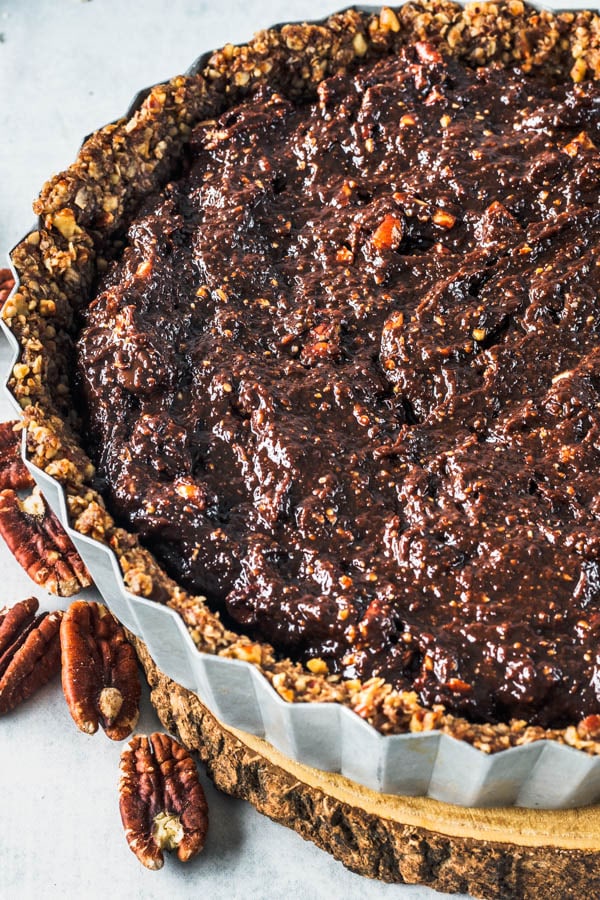 And then bake your vegan pie. 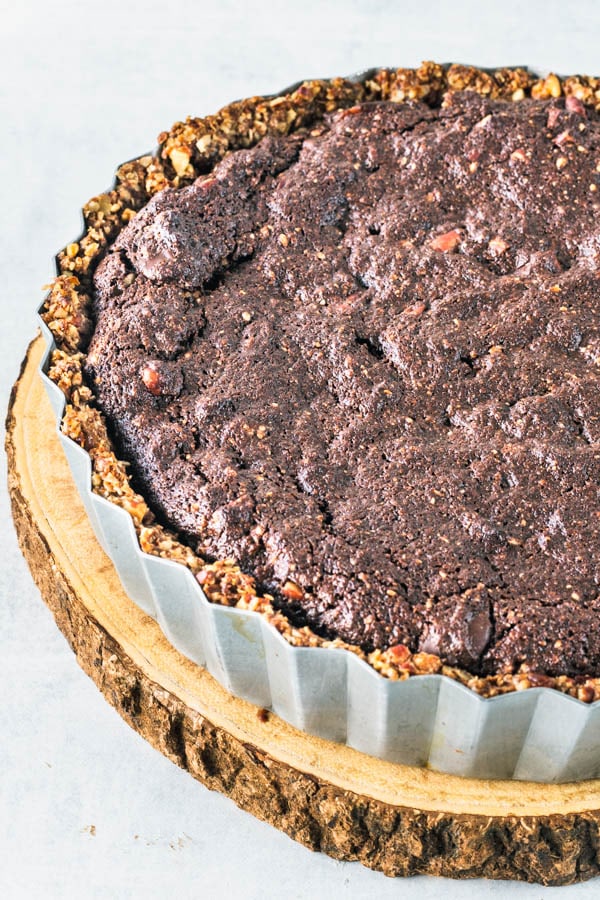 Let it cool. All the way. And then garnish it with the Vegan Ganache.

Check below some tips to achieve the vegan ganache piping consistency. 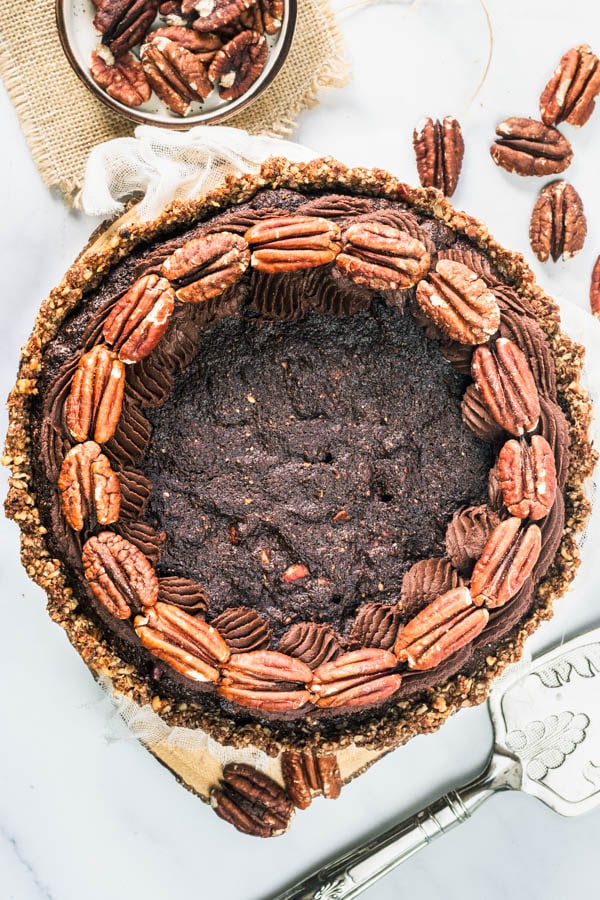 To make the vegan ganache ready for piping, you must first chill the ganache until firm in the fridge for at least a couple hours. And then, you must let it come to room temperature on its own, which will take a couple hours sitting on the counter.

So be aware that you need to make your ganache way ahead.

Then, after the ganache has come to room temperature, you can grab a whisk and vigorously whisk the ganache until smooth. And then it should be ready to pipe.

Other delicious toppings for this Pecan Brownie Vegan Pie could include: whipped coconut cream, or yogurt of whatever kind you like. 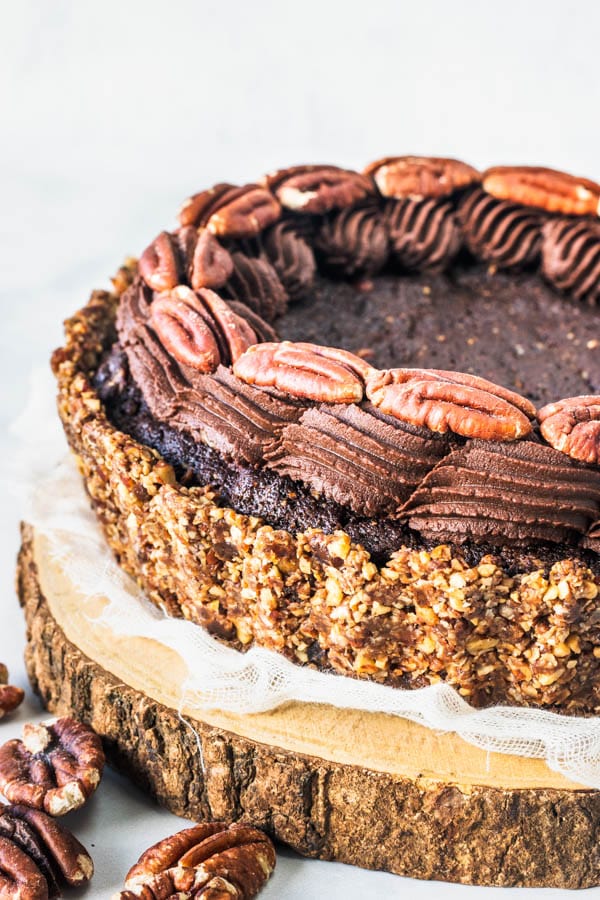 This Pecan Brownie Vegan Pie will be perfect for your end of the year celebrations. Even if you are a vegan and want to bring this treat to a party, I am sure non-vegans won’t mind at all! It’s so delicious, even my husband was converted.

Actually I dare say this Pecan Brownie Vegan Pie is the most perfect, fudgy, delicious brownie pie I’ve ever had! 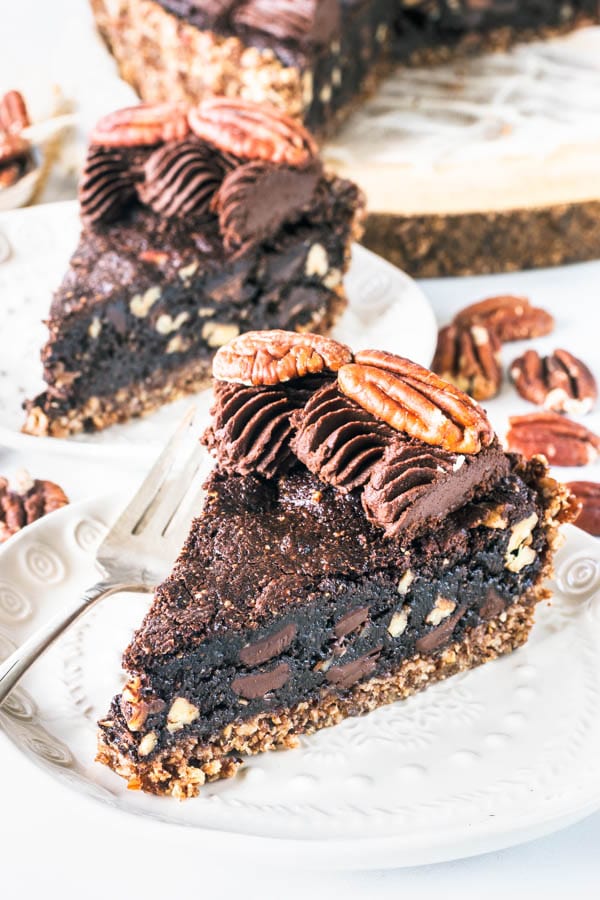 I hope you all liked my pie as well. 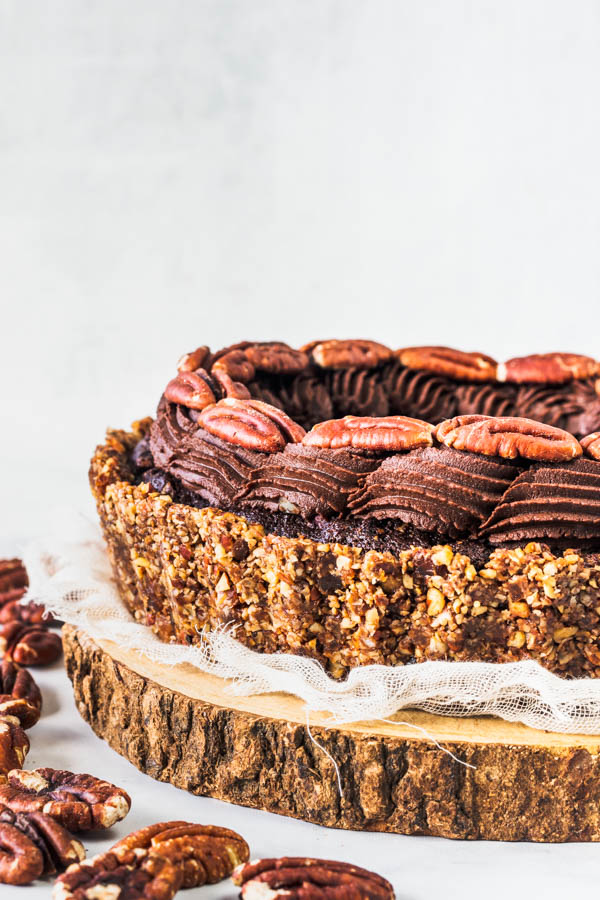 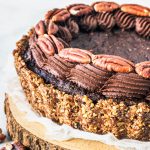 This Pecan Brownie Vegan Pie is also paleo, refined sugar free, and gluten free. Perfect for the holiday table, or just to snack on with some yogurt scooped on top, which is my favorite way of eating it.