Today I bring a special dessert! One of the most delicious cheesecakes I’ve ever made! Baklava Cheesecake! With a pistachio and pecan shortbread crust, filled with honey cheesecake, topped with baklava, all baked til golden puffy perfection!

Honey cheesecake on the bottom, and baklava on top! Guys, this cheesecake was wonderful.

I’d say it’s an intermediate to advanced recipe. It’s really not a *hard* recipe, but having some baking experience will help the process be smooth.

Make the honey syrup! Very easy to make, this is the syrup that will be poured over the baked cheesecake, on top of the baklava. It needs to cool down to room temperature before being poured over the hot Baklava Cheesecake, which is why you should make this first and set aside.

Make the pistachio and pecan shortbread crust. (yes, you can use other nuts such as walnuts, almonds, etc)

Let the dough chill in the freezer while you make the rest of the cheesecake.

Cut your phyllo pastry sheets the same diameter as the inside of the crust. Mine measured 6″ because I used a 8″ springform pan.

You will use 40 phyllo pastry sheets, but you will have a lot of leftovers from the side trimmings. I suggest making this with the leftovers of phyllo pastry.

The layers of the phyllo pastry sheet circles go like this:

*Each circle is brushed with melted butter before the next is placed on top.

**Ground pistachios and pecans and a touch of cinnamon

Refrigerate your baklava before cutting, and before putting it on top of the cheesecake. Or you can freeze it while you make the cheesecake part.

Make the cheesecake portion. This is a honey cheesecake, very simple and easy to make, and very tasty and creamy! Add a touch of cinnamon to the cheesecake if you want to. Totally recommend it!

The reason why the baklava needs to be cold is so it’s easy to manage.

When you make the cuts on your baklava, make sure you don’t slice all the way down to the bottom. Leave the bottom layer intact so you can move the baklava to the top of the cheesecake easily.

Bake cheesecake for about 1 hour, until the top is golden brown and puffed.

If necessary, protect the sides of the crust with foil, in case they are browning too fast.

Remove from the oven when it looks like this:

Let the cheesecake cool for about 5 minutes. Pour syrup over cheesecake. Do it slowly, waiting for some syrup to be absorbed before pouring some more.

Then let your baklava cheesecake absorb all the syrup and cool down at room temperature before transferring it to the fridge to let it rest overnight.

Look at that Baklava Cheesecake absorbing all of that good honey syrup.

The best part is that some of the syrup is going to soak in the crust, and you will bite into bits of heavenly syrupy flaky shortbread crust! Oh my! I am not joking when I say you are in for a REAL treat!

To decorate the top, I processed some pistachios in the food processor, and topped the cheesecake with some pecans.

Now that I think about it, I have a lot of pecan recipes on my blog!

And I also have some recipes with pistachios you can check out:

I guess most of my recipes have either nuts in them, or chocolate. Most likely both. This one has nuts, no chocolate this time!

Tips for making this Baklava Cheesecake

Did I mention I baked this Baklava Cheesecake twice before achieving my desired results?

This Baklava Cheesecake recipe has definitely surprised me in the most awesome way. It was hard to resist eating both cheesecakes (the test one, and this one, which were made a couple days apart). My husband and I were just totally swooning over this Baklava Cheesecake. All over it!

I hope you enjoyed today’s recipe! This is a recipe for a special occasion, and it deserves the spotlight! This is the type of cheesecake you bring to someone you love, or someone special!

Have a fabulous day! Thanks for reading! 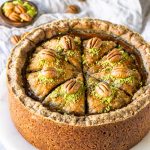 This is a Baklava cheesecake. Pistachio and Pecan shortbread crust, a creamy honey cheesecake filling, topped with a baklava layer, soaked in honey syrup. The best dessert you’ve ever had!
Course

*Here is how you make clarified butter.

*You won’t use all the dough, you will have some big trimmings you can use for wrapping asparagus and baking, for instance this awesome idea.