Hello friends! Let’s make this Vegan Beet Cheesecake recipe today! These mini vegan cheesecakes are also paleo, gluten-free, and absolutely delicious! And I am using beet crystals to make them!

I have been reading all about the amazing benefits that consuming these beet crystals can have in our health.

So basically, besides all of the minerals (calcium, iron, magnesium, copper, phosphorous, manganese and potassium) and vitamins (A, B1, B2, B6, C, and folate) containing in the beet crystals, these are awesome for people who work out a lot.

I work out 7 days a week between yoga, running, and body pump, so finding out about these crystals has been a game changer. They help our bodies respond to increased demands for oxygen and energy to fuel performance, and recover from sweat-induced electrolyte loss. YAY!

I am mostly adding them to smoothies, but of course I had to make a dessert recipe with them, so that’s how this recipe for Vegan Beet Cheesecake was born!

I am totally in love with this color too! If you are after any recipes with beet crystals, stay tuned, because I am for sure going to make more beet crystal recipes for the blog!

Are you a fan of vegan cheesecake? Ok, I understand that this shouldn’t actually be called cheesecake, because, ahm, there’s no CHEESE in it.

But for the sake of organization, and making sure my recipes are found by readers that are using search engines, I have to use this term. I would much rather call them Cashewcakes, instead.

Anyway, I am sure I already talked about this in my other cashewcake posts. Maybe someday we won’t be saying things like vegan cheesecake, or vegan chicken. Maybe…

But wait, it doesn’t end there. I have other vegan cheesecake recipes for you.

Make sure to check them out!

Also check out my other Vegan Desserts recipes.

Ps. besides the Vegan Salted Caramel Macarons, all of the above are also Paleo.

Check out that creamy texture!! So yummy!

We start these mini vegan cheesecakes hours before we actually make them. That’s because you must soak your cashews in water, to make them soft. The longer you soak them, the creamier the cheesecake will be.

Once you are ready to make the Vegan Beet Cheesecakes, simply place all ingredients for the crust in the food processor.

Then, once ready, press the crust on the bottom of a silicone cupcake pan.

This is the one I use:

The reason why you want to use a silicone pan is to make it easy to remove the mini vegan cheesecakes out of the pan after they have set.

You may use a large 9″ cheesecake pan for this, just make sure to line the sides with parchment paper, for easy removal of the cake later.

After pressing the crust down on the bottom of the pan, place the pan in the freezer while you make the vegan cheesecake batter.

Make the batter, and separate it into two bowls.

Then add the beet crystals to half of the batter, and process in the food processor until incorporated.

Start by pouring some of the batter that’s not colored with the beet crystals over the crust.

And then, right on top of it, in the middle, pour some of the beet colored batter.

Repeat this, alternating the batters, until you fill up the cupcake tin.

After that, you should put this pan in the freezer to let the batter set overnight before removing from the mold.

And then, you should be ready to pour the ganache on top.

Make sure the ganache is at room temperature when you pour it over the mini vegan cheesecake.

The best way to serve these, is to let them sit at room temperature for a few minutes before doing so. This way, the cheesecakes will be softer and creamy.

The Vegan Beet Cheesecake can be kept in the fridge for up to 4 days, or in the freezer for up to 1 week.

I hope you enjoyed today’s recipe. I am in love with vegan and paleo desserts, and this one checks all the boxes for me, specially because it’s such a feel-good recipe, with the addition of the beet crystals, and the fact that there’s no refined sugar, no dairy in it. 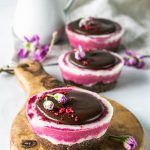 This Vegan Beet Cheesecake is a perfect no bake dessert. Also paleo, gluten-free, with a beautiful color, a creamy texture, and unbelievable taste. 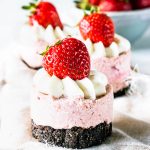 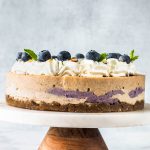 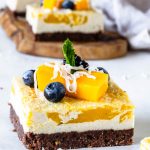 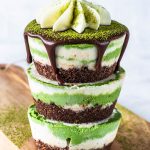 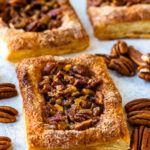