Hello friends! Today we are going to make the most delicious macarons ever! Cinnamon Roll Macarons coming in hot!

Make sure to watch the video on this page or on YouTube, to see how I made the swirl effect on the macaron shells.

I have been wanting to create beautiful Cinnamon Roll Macarons for a long time! And finally they are here!

It’s fall, almost winter, and the weather is calling for all the cinnamon recipes!

The mini cinnamon buns that you can see in these pictures are super cute too, and I am publishing a post soon showing you how to make them. For now, you can grab the recipe for them on my Cinnamon Roll Cupcakes recipe.

We start with just one batter, which we will make into two different colors: white and brown. The white is kind of a cream color for a few reasons, one- I added 1 tsp of cocoa powder to the dry ingredients because I wanted a bit of a tan color to the shells, since no cinnamon roll is actually white; two- once they bake, white macarons tend to turn orange/yellow-ish.

Then, we transfer each batter to a piping bag, snip the ends off, and place both piping bags in a larger piping bag, fitted with a round tip.

And that’s when we begin to pipe.

Make sure to watch the video and read the instructions below, to see exactly how to make the different color shells from the same batter.

The technique for piping the swirls is not the same as I usually use to pipe the macarons.

Usually, I recommend the following: position the bag directly 90 degrees over the center of each circle template, then apply gentle pressure for about 3 seconds, and pull the bag up.

However, if you pipe it like that, the shells are just going to be half brown, and half white.

Which is why for these Cinnamon Roll macaron shells, I recommend positioning the bag 90 degrees over the center of the template, then using a circle motion to go around a few times, until you fill up almost the entire circle template. This way the batters will be swirled.

Another tip for piping the shells for the Cinnamon Roll Macarons, is to use a smaller tip, I used a 0.25″ diameter tip. I usually use a 0.5″ diameter tip to pipe my regular shells.

If you use the large tip, a lot of batter will be dispensed and you won’t be able to get a nice swirl.

For the filling of the Cinnamon Roll Macarons, I used my ultimate favorite frosting: Cinnamon Cream Cheese Frosting!

I also use this frosting on my Cinnamon Roll Cupcakes, Apple Crisp Cupcakes, and on my Apple Macarons.

Also, notice that I am making this batch of macarons using egg white powder, which is something I started a little while ago, following advice from Nicole from Bake Toujours.

Egg white powder is not the same as meringue powder, so pay close attention when purchasing it. I can’t find it at the store, so I get mine online.

It helps the quality of the shells by improving the strength of the meringue, because you are essentially adding more protein to the meringue, without adding any extra moisture, since the egg white powder is dehydrated egg whites.

The results: fuller macarons, with better feet. Since the meringue is the base of the structure of the macarons, having a strong foundation helps with the final product.

If you like these Cinnamon Roll Macarons, here are some more recipes you may enjoy:

Also make sure to check out Macaron School, where I gather the best resources for you to learn how to make macarons! Lots of tips, tricks, troubleshooting guides, the science behind macarons, and more! 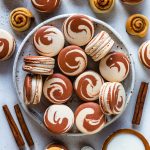 is not the same as meringue powder. Egg White Powder is made of only egg whites. They help with getting fuller shells, and specially when adding a lot of food coloring to the batter, because they make the shells dry faster. I recommend experimenting with it if you can find it. I use 4 grams for each 100 grams of egg whites.

Scale: Please use a scale when measuring the ingredients for accuracy. Macaron amount: it will vary greatly depending on how big you pipe the shells, and on how runny or thick the batter is.

Baking time/temperature: Baking time and temperature will vary according to your own oven. I recommend experimenting with your oven to find out the best time, temperature, position of the baking tray.

Oven thermometer: Make sure to have an oven thermometer to bake macarons. It’s one of the most important things about making macarons. Home ovens aren’t accurate at all at telling the temperature, and even a slight 5 degree difference can make or break your whole batch. Read more about it here.

Tray rotation: Lots of bakers don’t have to rotate the trays 180 degrees in the oven every 5 minutes, but I do have to with my oven, or I will get lopsided macarons. Please adjust this according to your oven.