This Cinnamon Cream Cheese Frosting came to life when I was trying to think about the perfect frosting to put on top of my Cinnamon Roll Cupcakes.

I loved the results so much that I decided to make an exclusive post about this frosting.

If you are a fan of those flavors, you will be enchanted with this Cinnamon Cream Cheese Frosting.

By standard, whenever I make cream cheese frosting, I like to use more cream cheese than butter in the recipe. Because it tastes better to me.

However, butter does provide a better piping consistency to frostings than the cream cheese does.

So have that in mind depending on what kind of project you plan on using this Cinnamon Cream Cheese Frosting, or any other cream cheese frostings for that matter.

And if you don’t want to compromise taste, and you want your cream cheese frosting to have the best taste ever, just keep the ratio 2:1 cream cheese to butter.

Now, about the cinnamon amount. It depends on how cinnamony you would like your Cinnamon Cream Cheese Frosting to be.

I wrote on the recipe to put 1/2-1 tablespoons of cinnamon in the frosting. I left it open like that because some people might think the full tablespoon too strong.

First, add 1/2 tablespoon, mix, and taste. If you feel like your Cinnamon Cream Cheese Frosting could take an extra sprinkle of spice, just add the other 1/2 tablespoon of cinnamon in.

This is the brand I use. It’s very important to use good quality Ceylon cinnamon in my recipes.

Avoid buying Cassia, which is the majority of the cinnamon you will find at the store. If the package doesn’t say: Ceylon, then it’s probably Cassia. You want to stay away from Cassia cinnamon if possible, because it doesn’t have as many health benefits as the Ceylon does. Ceylon is known as “real” cinnamon, while Cassia is known as “fake”. Also, Cassia cinnamon has a lot of coumarin, which is a toxic substance that can cause liver problems. Now, you’d have to consume a lot of cinnamon, everyday, for that to happen I believe. But still, Ceylon cinnamon is undeniably better.

Ceylon cinnamon tastes better too. I really like this article from Paleo Hacks about the differences between Cassia and Ceylon cinnamon.

Anyway, now that we’ve covered everything, you may go to the post about my Cinnamon Roll Cupcakes, where I put this delicious Cinnamon Cream Cheese Frosting to good use.

I also used this Cinnamon Cream Cheese Frosting in my Apple Crisp Cupcakes.

Thank you so much for reading! 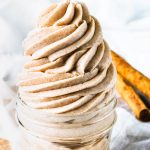 This Cinnamon Cream Cheese Frosting is perfect for Fall.
Course 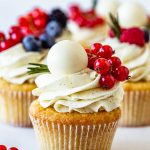 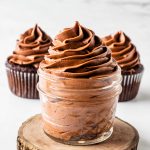 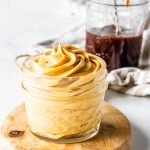 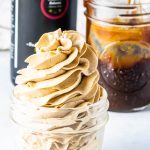