Hello friends! Today I will show you an easy Vanilla Cupcakes recipe. This is actually the best vanilla cupcake recipe I have ever made! Fluffy and moist vanilla cupcakes topped with a Vanilla Swiss Meringue Buttercream.

Make sure to watch the video on this page or on YouTube to check out how I made the best Vanilla Cupcakes in the world!

If you come to my blog regularly, you know that plain flavors aren’t really something I make too often.

But I always have requests for these plain and simple flavors.

Which is why I am posting this recipe for Vanilla Cupcakes today. Plain and simple moist and fluffy vanilla cupcakes, topped with the lightest frosting ever, Swiss Meringue Buttercream.

Swiss Meringue Buttercream tends to be a favorite for those who don’t enjoy overly sweet recipes.

American Buttercream, made from butter and powdered sugar tends to be super sweet, which I love.

But I understand it’s not everyone’s cup of tea.

Making Swiss Meringue Buttercream is not complicated, but it does involve some intricacies in order to get a perfect frosting.

Tips on how to make Swiss Meringue Buttercream

If you are making the Swiss Meringue Buttercream for your Vanilla Cupcakes and then find out that the frosting isn’t coming together, or it’s lumpy, then you may have ran into some technical issues.

Let’s check out how to solve them.

If the Swiss Meringue Buttercream isn’t coming together, if it’s too runny, not becoming creamy no matter how long you whip it, it could mean a couple of things:

1- You didn’t whip the meringue to stiff peaks before you started to add the butter.

2- The butter was too warm.

How to troubleshoot soupy and runny Swiss Meringue Buttercream: what I recommend doing is placing the bowl with the frosting in the fridge for 5 to 10 minutes, and then trying to whip it again. If after a couple of minutes whipping it still doesn’t come together, repeat this, place it in the fridge for 10 to 15 minutes and try to whip it again. It should come together nicely. If it doesn’t than that means the meringue was too soft before adding the butter in, so nothing you do at this point will make it work.

If the buttercream is lumpy, with chunks of butter in it, it means that the butter was too cold when you started to add it in.

You can try leaving the bowl at room temperature for 30 minutes or so, and then try to whip it again. This is not guaranteed to work, as the buttercream might still have air pockets or butter lumps that just won’t incorporate no matter how long you let it sit.

This recipe for Swiss Meringue Buttercream will be enough to frost 14 Vanilla Cupcakes.

You can easily double the recipe to make 28 cupcakes, and enough frosting to pipe on top of 28 cupcakes.

Tips on how to make the best Vanilla Cupcakes

Here are some tips on how to make perfect moist vanilla cupcakes:

Here on this article I have a lot more tips on how to make better cupcakes.

Read my 12 Cupcake Tips: How to make perfect cupcakes every time!

These Vanilla Cupcakes with Swiss Meringue Buttercream are a dream, they are fluffy, moist, and not overly sweet!

Here are some more cupcake recipes you may enjoy:

I hope you enjoyed today’s recipe. Watch the video on YouTube or on this page showing you how to make this delicious easy vanilla cupcake recipe.

Thank you for reading! 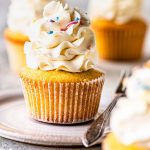 These delicious Vanilla Cupcakes are frosted with Swiss Meringue Buttercream. This frosting is absolutely beautiful and it’s perfect for people who don’t like overly sweet desserts. Swiss meringue buttercream is creamy and light like a cloud. This is the best vanilla cupcake recipe ever!

Swiss Meringue Buttercream Troubleshooting tips: if the buttercream is looking soupy, or doesn’t seem to become fluffy and creamy, it might be for a couple of reasons. Number one: you didn’t whip the meringue until stiff peaks were formed, and in this case, it will be very hard to get this buttercream to work, and you mostly likely have to start over. However, if the buttercream is looking soupy and runny, it might also be the case that your kitchen is too hot, or the butter was too soft when you started to add it. And in this case, it might work to place the bowl of the mixer in the freezer for about 5 minutes. After 5 minutes, remove from the freezer and go back to whipping, and your meringue will mostly likely start to get creamy and fluffy.

Vanilla Bean Paste: if you don’t have it, feel free to use vanilla extract.

Storage: store the cupcakes covered so they don’t dry out in the fridge.

Freezing: you can freeze the unfrosted cupcakes for up to 2 months. And you can also freeze the frosting for up to 2 months. Make sure to package both really well. To thaw the cupcakes remove them from the freezer and thaw in the fridge for a few hours. To thaw the Swiss Meringue Buttercream let it sit in the fridge overnight, then let it sit at room temperature for 1 hour or so, then beat with the mixer to make it creamy again. 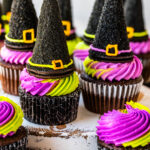 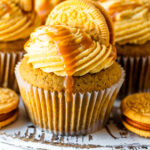 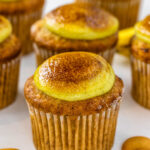 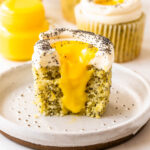 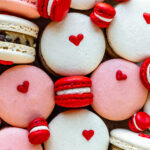