Hello friends! Today we are making these super cute and delicious Mini Cinnamon Rolls. This is a small batch cinnamon roll recipe, it makes about 14 mini cinnamon rolls (depends on how big you cut them).

These Mini Cinnamon Rolls are topped with a delicious and tangy Cream Cheese Frosting. They are fluffy, soft and so good!

Make sure to watch the video on this page or on YouTube showing you how to make these Mini Cinnamon Rolls.

And I realized they are super cute, easy to make, and perfect if you don’t want to make a whole huge batch of cinnamon rolls!

The very best thing about this recipe is how adaptable it is. And also the fact that you can fit this recipe into your schedule no matter what.

I will give you tips for making these mini Cinnamon Rolls ahead, and I will also give you tips on how to speed up the proofing time of the cinnamon rolls.

Can I make these Mini Cinnamon Rolls ahead?

Why I am glad you asked. Yes you may make these cinnamon rolls ahead.

There are two ways of making these ahead.

Make the dough ahead

Make the dough, place it in an oiled bowl, and place it in the fridge overnight. Don’t let it rise at room temperature. Right after you make it, refrigerate it. Make sure to wrap it tightly with plastic.

Next day, remove the dough from the fridge, divide it in half, and proceed to shape the rolls. Let them rise until puffed, and bake. Rising time might be longer than if you hadn’t refrigerated the dough.

The dough will be better if shaped and baked within a day.

Assemble the rolls ahead

This second way is going to leave you less work to do on the day of serving the rolls. Say you are hosting a breakfast, or serving brunch to your family, and you don’t want to or don’t have time to spend in the morning, this is your best option.

First make the dough, place it in an oiled bowl. Let it rise at room temperature for about 1 hour. Divide the dough in half, roll it out, shape the rolls. Place the rolls on a lightly oiled pan, cover tightly with plastic wrap, place it in the fridge overnight.

The next day, remove from the fridge, pre-heat the oven, and let the rolls sit at room temperature for about 1 hour, or until they aren’t cold anymore, and bake.

The dough will be better if baked within a day.

Can I freeze the cinnamon rolls?

Yes, you can freeze the cinnamon rolls. Repeat the steps described above to refrigerate the rolls, but instead of placing them in the fridge, place them in the freezer, wrapped with an extra layer of protection.

Before shaping the dough, or baking the already assembled rolls, let them thaw in the fridge overnight.

Freeze the rolls, or the dough for 1 to 2 months.

Can I use active yeast instead of instant yeast?

You can sub the instant yeast for active yeast. To do so, you must proof the yeast.

Mix the yeast, warm water, and sugar in a bowl. Let the mixture sit for 5 to 10 minutes until it blooms. Then, add the rest of the ingredients to the bowl and proceed normally with the rest of the recipe.

Also note that the rising time might be longer than when using instant yeast.

And speaking of rising time, here is how to speed up the rising time of the dough.

Here are two options to speed up the rising time of the Mini Cinnamon Roll dough.

Here are some more notes about this small batch of Cinnamon Rolls:

I prefer to use softened butter for the filling, but sometimes I use melted, in case I have forgotten to take the butter out of the fridge to soften. The melted butter will make for a more runny filling, that may leak out once baked, unless you refrigerated the rolls to proof overnight.

You can fill these rolls with anything you want, things like jam, custard, or anything of the sorts.

Also, you can add finely chopped nuts to the filling, or citrus zest, or flavored extracts to the glaze.

Use floss to slice the rolls instead of a knife. The floss will produce a super clean cut.

If you use the knife or bench scraper, it might squish the rolls as it cuts it, making it lose its perfectly round shape. However, this is just a minor detail, the rolls will be more than beautiful if sliced with a knife.

Make sure the water you are using in the dough is at 90 to 100ºF. This is very important, because hot water may kill yeast.

If the dough doesn’t rise, it could be because the yeast was killed, or wasn’t fresh.

Also, for optimal rising, make sure to knead the dough properly, not add too much flour (which is why it’s important to use a scale to weigh the ingredients instead of measuring with a volume cup), and let the dough rise in a warm environment.

If you love these Mini Cinnamon Rolls, here are some more recipes you may like:

Thank you so much for reading! Have a beautiful day! If you make this recipe, tag me on instagram, I love to see your creations! 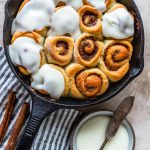 These Mini Cinnamon Rolls are super cute and easy to make. Absolutely fluffy and soft! Topped with a cream cheese frosting.
Course

Instant yeast: you can sub for active dry yeast, as long as you first proof the yeast. Mix the yeast, warm water, and sugar in a bowl. Let the mixture sit for 5 to 10 minutes until it blooms. Then add the rest of the ingredients to the bowl and proceed normally with the recipe. Rising time might be longer than when using instant yeast.

Make ahead: This dough is super versatile. You can make the dough ahead of time two different ways:

Freeze: you can also freeze the dough and the filling both as indicated above, but let it thaw in the fridge for a few hours before shaping or baking. The dough will freeze well for 1 to 2 months.

Variations: fill the rolls with jam, instead of the cinnamon filling. For the glaze, you can add citrus zest.

Rising time: to speed up rising time you can use Rapid-Rise yeast, which takes about 10 minutes each rise. Or do the following: pre-heat your oven to 200ºF for about 5 minutes. Turn it off. Cover the bowl with the dough with a damp towel. Place the bowl in the slightly warm oven. Check again in 10 to 15 minutes to see if the dough has risen.