Hello hello! Fancy some Vegan S’mores Donuts? Come with me, I can show you how to make them!

So these Vegan S’mores Donuts are filled with a Vegan Marshmallow Fluff, topped with Vegan chocolate ganache, and vegan graham cracker crumbs!

You can get vegan graham cracker crumbs at the store, but you can make your own! Here is my recipe for homemade Vegan Graham Crackers! Totally game changer!

Making these Vegan S’mores Donuts may seem complicated, but it’s actually quite simple, if you follow my detailed instructions and steps below.

How to make vegan donuts?

Here are all the ingredients you will need to make vegan donuts dough.

Start with the water and milk (any non-dairy kind, I used almond).

Heat up the water and the milk to 90F, lukewarm temperature. Make sure it’s not too hot, or that might kill the yeast.

Knead the dough for 6-8 minutes with a dough hook, if using an electric mixer. In case you want to knead by hand, you’ll probably have to knead the vegan donut dough for about 10 minutes.

Once dough is smooth, and tacky, but not sticky, place it in a lightly oiled bowl.

Let the vegan donut dough rest for about 1 hour, or so. Might need a bit more time depending on how warm your kitchen is. It should double in size, like this!

If you touch the dough with your fingers, the top shouldn’t feel sticky, and it should spring back.

Remove dough from the bowl and place it on top of a lightly floured counter.

Are you already with high expectations for these Vegan S’mores Donuts? Cause I can feel it!

Using a rolling pin, gently roll out the dough until it’s about 3/4″ thick.

Be gentle, not to deflate the dough so much.

This is the one I use.

Place the donuts on top of a baking sheet lined with a silicone mat, lightly floured.

Gather the trimmings together, knead them lightly back into a ball of dough, roll them with a rolling pin, and cut more donuts.

Let the donuts rise for about 45-60 minutes, until they double in size and become puffed like this.

*This is a tip from the time I used to work at a bakery, many moons ago. One of our most popular items were Friday and Saturday special donuts. And we made the dough the night before, and let the dough rise in the fridge overnight. The next morning, I would come in, cut the donuts from the cold dough, and let them rise from the cold temperature. They would be much easier to manage and transfer to the fryer without deflating.

Let the donuts cool down before proceeding with filling.

As you are waiting for the donuts to cool down, I recommend making the vegan chocolate ganache, as it needs some time to come to room temperature before you can dip the donuts in them.

You can use vegan chocolate chips, or dairy-free chocolate bars, chopped.

Let the ganache come to room temperature before proceeding.

I recommend making the vegan marshmallow fluff just before you are ready to fill the donuts.

The marshmallow fluff made with aquafaba will be stable for just a couple of hours, and after that it will start to collapse. That’s just the nature of the aquafaba based meringue.

To try and make it a bit more stable, I reduce my chickpea brine, by boiling it for about 10 minutes until about half the volume, and then storing in the fridge until I am ready to use it. Read the instructions on the post below to see in details how to do this.

Once the donuts have cooled down, you can proceed with filling them.

Use a straw to poke a hole in the middle of the donuts, or simply slice them in half with a knife.

Place vegan marshmallow fluff in a pastry bag. And fill each donut up.

We are almost there folks!

And immediately after, sprinkle graham cracker crumbs on top of the chocolate, before it has a chance to set.

HERE IS MY RECIPE FOR HOMEMADE VEGAN GRAHAM CRACKERS.

And you’re done! Voila! It looks like a lot of work to make these Vegan S’mores Donuts, but I promise you your efforts will be rewarded with how incredibly delicious they are!! We didn’t have a single one leftover! They were gone and thoroughly enjoyed!

I really hope you enjoyed today’s recipe for these lovely Vegan S’mores Donuts. And I hope you found my explanations and pictures helpful! Have a lovely day and thank you for reading my blog! 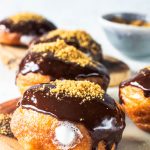 This is the recipe for my Vegan Graham Crackers I used to make the crumbs to put on top of the donuts. Check it out!