These Vegan S’mores Cupcakes are the ultimate vegan summer dessert!

Here is how you make them.

Start by removing the center of the chocolate cupcakes with a spoon.

Watch what happens next…

That’s right! We fill the cupcakes with chocolate frosting! Ahem! You can use a piping bag, or a spoon to do this. I use the same piping bag I’m going to use to pipe the frosting on top of the cupcakes later on.

Now, place the top of the cupcake back on.

After this step, pipe some of the chocolate frosting right on top of the cupcakes. I actually forgot to get a picture of this step, and skipped right to the next one. The next step would be to sprinkle graham cracker crumbs on top of the frosting.

Don’t let the frosting set before doing this. Sprinkle the crumbs right after piping the frosting.

HERE is my recipe for Vegan Graham Crackers! Make sure to check it out. It’s an easy and fun recipe!

Grind up the graham crackers and you will end up with this delicious powder that you can use to sprinkle on top of the frosting.

I believe that Nabisco graham crackers are vegan also. But making your own is a super fun project! And would make these Vegan S’mores Cupcakes even better! I guarantee!

The frosting will hold its best shape for a couple of hours. You can make the cupcakes ahead. The cupcakes will actually hold in the fridge for up to 4 or 5 days, if well packaged.

The Vegan marshmallow frosting is actually very easy to make.

This is the tip I used to pipe the frosting.

I always get questions about this tip, so I am including it here for you! It’s one of my go-to tips!

To make the Vegan Marshmallow frosting, I used chickpea brine, which is also called aquafaba.

In the recipe below I explain both steps with the reduction of the aquafaba, and without.

If you would like to toast the vegan marshmallow frosting, you can use a simple torch like this one.

If you are a baker, this is a very good tool to have around in case you want to toast marshmallow, make crème brûlée, etc…

And here you have a shot of the middle of the cupcakes, of course! I couldn’t leave you hanging like that! Check out that indulgence, richness! My husband had no idea this was even vegan!

And don’t forget, here is the recipe for the Vegan Graham Crackers I used on these cupcakes.

Here are some other Vegan Cupcake recipes, weirdly enough they all involve chocolate lol!

I hope you liked today’s recipe! If you are a regular reader, I appreciate your support, it means the world to me! And if you are new here, I hope you come back! Thank you so much for reading! You rock, I know you do! 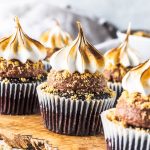 Just grind up the graham crackers, and make sure to sprinkle them on top of the cupcakes as the frosting has just been piped, this way the crumbs will stick to the frosting before it sets.