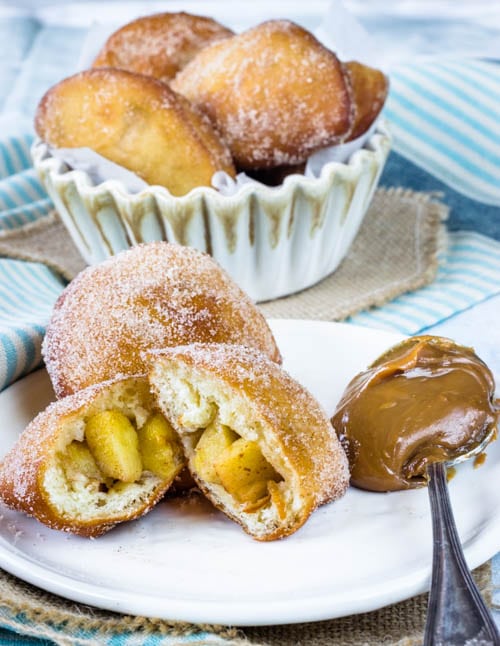 In Brazil we call them “rain cakes”, bolinho de chuva.

You’re supposed to make them when it rains, only! No, just kidding, you can make them whenever duh! But they are perfect for a rainy day, staying in watching cartoons while your mom makes them in the kitchen (true story).

Well, my mom is far away in Brazil, and quite honestly doesn’t cook as much anymore. My dad took over cooking duties because he makes some bomb food- from bread to homemade cheese! The man MAKES cheese, folks!!!

So anyway, I don’t have anybody to make me some beignets. So I HAVE to make them myself. 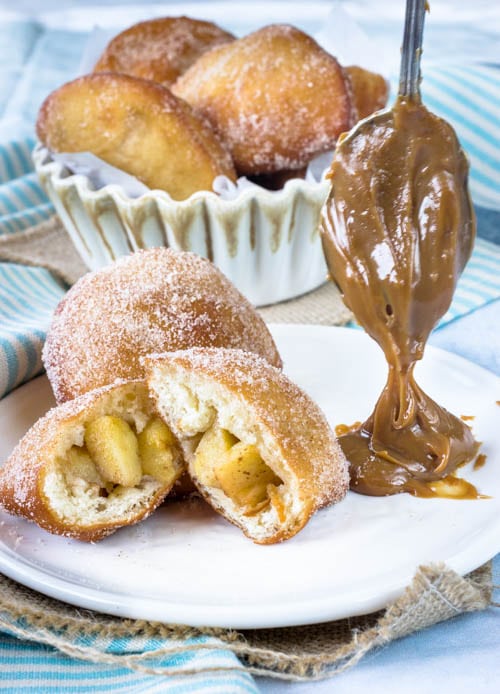 My son was watching his favorite show, I heard the commercial break and I knew he was going to come in the kitchen looking for me snacks.

I had a beignet ready for him! He took the beignet and ate the whole thing, watching his show.

And as I watched him do that I thought: “This is nice! History repeats itself! Family traditions are the best!” 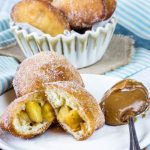 These apple and banana beignets are the best thing to eat when it's raining outside. They are fluffy pockets, filled with cinnamony fruit, dipped in dulce de leche! Do I need to say more?
Course Dessert
Prep Time 3 hours
Cook Time 2 hours
Total Time 5 hours
Servings 40 beignets
Calories 45 kcal

You can buy dulce de leche at the store and if you can’t find it, read my post about my Snickerdoodles filled with dulce de leche and I explain how to easily make this delicious beautiful caramel at your house!

Nutrition Facts
Apple and Banana Beignets
Amount Per Serving
Calories 45
* Percent Daily Values are based on a 2000 calorie diet.