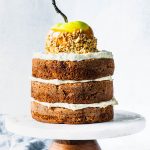 Note about the apple sauce- I make my own apple sauce by simply cooking peeled and diced apples with a stick of cinnamon, adding a little water as needed. I cook them slow and low, at a low temperature and for a long time, so they reduce quite nicely, as the apples caramelize. If you add a pear in there, you will have the most delicious apple sauce of your life, because the pear should offer sweetness to the sauce.

Note about the Apples- For best results when dipping your apple in the caramel, you should remove the wax from the apples if you bought them at the store. If you picked at a farm, you probably won’t have to. To remove the wax, simply place the apple in boiling water for like 1 second. Immerse the apple in the water with a ladle and quickly remove it. Pat it dry, and put it in the freezer. When removing from the freezer, pat it dry with paper towels again to give the caramel a chance to stick to the apple. The apples being cold will also help.

Note about the Caramels- The number of caramels you are going to use will vary according to the brand. Since I used Wheter's Original, I had to use 35 caramels. You might have leftover caramel, but I am sure you won’t mind dipping a couple more apples in them and eating right? Just try it, trust me, you won’t regret it.